Legislation to ensure that fines paid to the NCAA by Penn State would benefit Commonwealth residents received final approval in the House Wednesday and was sent to the Governor for enactment into law. Senate Bill 187, which I co-sponsored, would place the fine money in a trust fund administered by the state Treasury and appropriated to the Pennsylvania Commission on Crime and Delinquency for child advocacy programs and to combat child sex abuse.

Senate Bill 333 would eliminate the Philadelphia Traffic Court in the state constitution. Senate Bill 334 would statutorily transfer its responsibilities to Philadelphia Municipal Court. Both bills now go to the House of Representatives for consideration.

SB 302 now goes to the House of Representatives for consideration.

I had the distinct honor and privilege of delivering the annual Lincoln Day remarks in the Senate Chamber on Wednesday.

Working for a “Green” Pennsylvania

On Monday, the Joint Legislative Air and Water Pollution Control and Conservation Committee, on which I serve as Chairman, hosted an Environmental Issues Forum to gather information about a new business partnership between recycling businesses and Marcellus shale gas operators.  The committee received testimony from David La Fiura of Ultra-Poly Corporation and Scott Faught of Wellspring Environmental Services about their processing and recycling of liner materials from completed well sites. 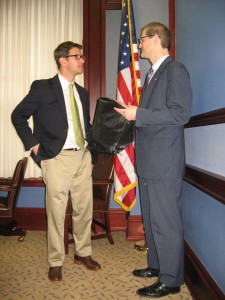 David La Fiura told me about products produced by Ultra-Poly Corporation during a forum this week hosted by the Joint Legislative Air and Water Pollution Control and Conservation Committee, which I chair. Ultra-Poly is one of the largest recyclers of plastics in North America and has a plant in Berwick, which processes liner materials.

School emergency plans and security measures designed to ensure student safety and increase school-to-parent communication during an emergency received an in-depth review during a joint public hearing by the Senate Veterans Affairs and Emergency Preparedness Committee, which I serve on, and the Education Committee on Wednesday.

Among the strategies discussed at the hearing was Senate Bill 10, legislation that would dramatically increase the amount of funding available for grants which schools could utilize for school safety and violence prevention initiatives, including training and hiring armed guards to protect their students, teachers and administrators.

Video and written testimony from the hearing are available here.

The Senate Communications and Technology Committee held a hearing on Wednesday to hear experts detail projected advances in variety of technological fields. The hearing – entitled “Technology, Communications and eHealth” – provided the Corbett Administration, telecommunications representatives and health care officials with an opportunity to speak about the current environment and projected technological advancements in their areas. For video and the written testimony from the testifiers, click here.

The Senate Environmental Resources and Energy Committee, which I serve on, approved two bills on Tuesday.

Senate Bill 411, which I co-sponsored, would limit the treatment liability of entities that choose to utilize acid mine water (AMD) for hydraulic fracturing of oil/gas wells, or other industrial uses. This liability protection was a policy recommendation that was acknowledged in the report issued by the Governor’s Marcellus Shale Advisory Commission.

Senate Resolution 29 directs the Center for Rural Pennsylvania to study the residential, commercial and industrial extension of natural gas distribution infrastructure by collecting and analyzing information on the estimated demand for natural gas service in un-served and under-served areas of the commonwealth. The Center would be responsible to report its findings, plans, and recommendations to the General Assembly no later than August 1.