Senator Scott Hutchinson and Representative Kathy Rapp had the privilege of escorting Governor Tom Corbett to the House of Representatives on Tuesday, February 4, to deliver his budget address for the 2014-15 fiscal year.

“It was truly an honor to be selected to serve on the committee to escort and introduce the Governor to the joint legislative session for his annual budget address,” said Senator Hutchinson.  “While largely a ceremonial role, today’s budget address begins in earnest the very important business of enacting a sensible and fiscally responsible state budget.”

“The Governor’s budget address serves as the annual blueprint for the ongoing budget negotiations that will take place over the next several months as we work together to develop a plan that best serves the people of Pennsylvania,” said Representative Rapp. “However, I must emphasize that today only marks the beginning of the budget process.  There is much hard work that needs to be done between now and June 30, when a final version of the 2014-15 spending plan must be in place.” 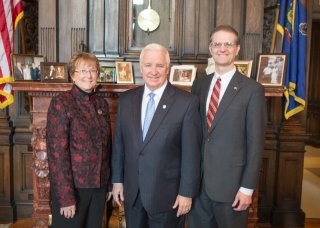