Safety concerns about the dam forced the Fish and Boat Commission to drain the 52-acre lake in Middlesex Township nearly three years ago.

The three senators jointly advocated the project which involves the reconstruction of the dam’s concrete spillway and the reinforcement of its embankment. In a joint letter to the Governor, dated January 24, 2014, the legislators noted the efforts of a strong private-public coalition in support of the project and urged the Governor to release capital budget funds for the work.

“There is a commitment by not only the community, but state agencies and the legislators of Allegheny and Butler counties as well,” the legislators wrote. “The lake was once a viable part of the community and it could function as that again. We ask for your consideration of releasing capital budget funds for the Glade Run Lake Dam repair and restoration.”

The project has the support of the Fish and Boat Commission, a number of local municipalities, the Butler County Board of Commissioners and the Glade Run Lake Conservancy, a 2,000-member citizens group formed after the lake was drained in June 2011.

“I am pleased and grateful that the Governor has committed this vital state funding for the rehabilitation project,” said Senator Vulakovich, who currently represents Middlesex Township as part of the 40th Senatorial District. “This truly is a cooperative effort that has brought together local, county and state agencies and officials, all working to restore this lake. With the state funds in place, we hopefully can expeditiously move forward with the rehabilitation of the dam and surrounding area.”

Under legislative redistricting, which goes into effect later this year, Middlesex Township will move into the 41st Senatorial District represented by Senator White.

“Glade Run Lake, particularly once it is refilled, is certainly a welcome addition to my district,” Senator White said. “The draining of the lake was a sad occasion for the region, especially for all of the anglers who made it a popular location for fishing. I was pleased to work with my colleagues and the community to support this project to bring back this recreational facility.”

While Glade Run Lake and Middlesex Township are not among the substantial number of Butler County communities included in the 21st Senatorial District represented by Senator Hutchinson, he recognized the importance of its restoration and stepped in to work with his colleagues to promote the project.

“We must work to preserve and protect the natural resources of our area and the restoration of Glade Run Dam and Lake is a major step in that direction,” said Senator Hutchinson, who serves as Chairman of Joint Legislative Air and Water Pollution Control and Conservation Committee. “The scope of this project goes well beyond one community or even Butler County. This project provides regional benefits, economically and environmentally, and I am proud to work with the Governor and my colleagues to help bring it to fruition.” 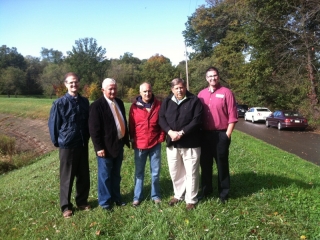