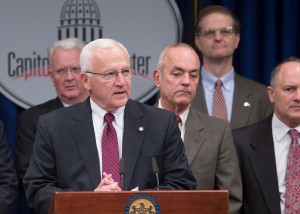 Senator Scott Hutchinson joined with a number of his colleagues at a press conference in the state Capitol Tuesday to unveil the Center for Rural Pennsylvania’s report on the heroin crisis in Pennsylvania.

With an increasing number of overdose deaths in the state, the Center for Rural Pennsylvania today released a report detailing the heroin crisis in Pennsylvania, according to Senator Scott Hutchinson. Based on testimony from more than 50 presenters at four statewide public hearings, the report details specific legislative actions and identifies nearly 20 issues requiring additional evaluation, research and action.

“The number of fatal heroin overdoses in Pennsylvania is growing at an alarming rate. It is on the rise in all areas of the state and across all segments of our population. In fact, more Pennsylvanians ages 20 to 44 are now dying from opioid overdoses than motor vehicle accidents,” said Senator Hutchinson, who participated in the Center’s public hearing at Clarion University on August 19.   “This report provides an excellent foundation for a comprehensive response by state government, in cooperation with law enforcement and community leaders, to address this issue.

Click here for video from the press conference unveiling the report.