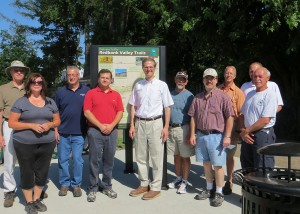 Senator Scott Hutchinson met with members of the Redbank Valley Trails Association near New Bethlehem, Clarion County to view improvements made to the project. The 51-mile recreational trail system utilizes a former rail corridor and is part of a growing trail network in western Pennsylvania.

Allegheny Valley Land Trust will receive a $150,000 Greenways, Trails and Recreation Program grant to continue work on the Redbank Valley Trails, according to Senator Scott Hutchinson.

The funding, approved by the Commonwealth Financing Authority today (October 21), will be used for improvements to the eastern portal of the Climax Tunnel in Porter Township, Clarion County. The project will provide a safe entrance into the tunnel by rebonding its supportive spring arch.  The work is estimated at $307,800 and when completed will link together the entire 51 miles of Redbank Valley Trails from Brookville to the Allegheny River. The Redbank Valley Rail Trail was honored by the state as Pennsylvania’s 2014 Trail of the Year.

“I am truly grateful for the support shown by the Commonwealth for this recreational project,” said Senator Hutchinson. “Once the work on Climax Tunnel is completed, hikers will have a great trail through Clarion and Jefferson counties and access to a trail system spanning from Erie to Pittsburgh. Completion of the Climax Tunnel project will not only provide more recreational opportunities for the community, it will also be an economic boon to the region.”

Earlier this month, the Allegheny Valley Land Trust received a $500,000 grant from the Community Conservation Partnerships Program. The CCPP grant will go also toward rehabilitation of the Climax Tunnel, as well as construction of a trailhead at the western portal, construction of 2.3 miles of trail from the trailhead to St. Charles Road, ADA access, landscaping and other site improvements.

“These grants represent a sizeable investment by the state in the development of recreational areas throughout the region,” Senator Hutchinson said. “These trails and parks and other recreational facilities will provide new opportunities and improve the quality of life for everyone in the region.”