More than 110 students and advisors from 12 secondary schools across the 21st Senatorial District had the opportunity to get a first-hand look at legislative and state government operations during a student government seminar hosted by Senator Scott Hutchinson on March 12 at Clarion University.

During the morning, the students divided into Senate committees to discuss bills, take positions on legislation and draft laws. The students came together after lunch to convene as the full Senate to consider the bills crafted by the committees.

“Students had an opportunity to see how state government works and the way that legislators work on public policy issues,” Senator Hutchinson said. “The attendees interacted with students from other high schools, elected officials and people in government relations while developing and voting on legislation as they served as members of the General Assembly.” 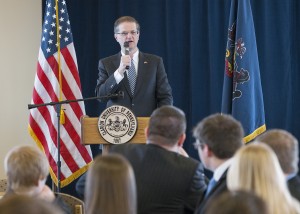 Senator Scott Hutchinson discusses the legislative process with students from around the 21st Senatorial District during his Student Government Seminar held March 12 at Clarion University.