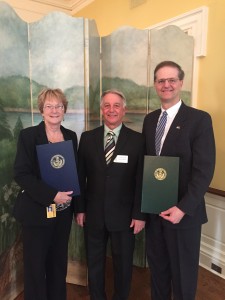 Huffman was one of only eight government officials and nine communities from across the Commonwealth who received awards honoring their service as part of the 20th Annual Governor’s Awards for Local Government Excellence during an April 13 ceremony at the Governor’s Mansion in Harrisburg.  He was presented the award by Governor Tom Wolf.

“Basil Huffman has been a true champion for Forest County for nearly 20 years,” said Senator Hutchinson. “He has worked tirelessly for the people of the county and has played a very active role in a number of regional programs and projects as well. There are a number of projects around the county that came about as a result of Commissioner Huffman’s work, but perhaps his greatest legacy involves the number of lives he has touched through his strong support of programs for local veterans. He truly deserves this well-earned award from the state.”

“A U.S. Navy Veteran, who is still giving back to his community in his dual roles as the Forest County Director of Veterans Affairs and a long-time Forest County Commissioner, Basil Hoffman’s unmatched record in effective day-to-day management and also making long-term strategic visions become reality is truly outstanding and irreplaceable,” said Representative Rapp.   “Congratulations Basil on this long overdue statewide recognition in setting the standard for local government excellence and best wishes for future success.”

“I have had the privilege to work with Commissioner Basil Huffman for almost 14 years. First as a fellow commissioner and now as a representative, I have found Basil to be attentive and engaged locally and through their statewide association. The residents of Forest County are fortunate to have him as their Commissioner,” said Representative Oberlander.

Huffman was nominated for the award by the County Commissioners Association of Pennsylvania, which noted his efforts to promote major capital improvement projects including historic courtroom renovations, transportation and bridge projects and working with the state in the process leading to the new State Correctional Institution Forest.

The Association also cited Huffman for his extensive involvement with numerous community organizations and events, as well as his work to support the county’s veterans.