Senator Scott Hutchinson had the distinct honor of participating in a special memorial ceremony today (December 7) in the State Capitol commemorating the Japanese attack on Pearl Harbor that led to America’s entrance into World War II.

“It was truly an honor to stand with the members of Armed Forces to honor the Pearl Harbor survivors, Isaac George from New Castle and George Grove from York, who attended the ceremony,” Senator Hutchinson said. “This year, as we mark the 75th anniversary of one the darkest days in our nation’s history, it is important that we honor our veterans and remember that our nation and her Allies brought light and freedom back to countries around the world.”

Senator Hutchinson is the prime sponsor of Senate Resolution 494, which commemorates December 7, 2016 as “Pearl Harbor Remembrance Day” in Pennsylvania.

“There were 22 servicemen from Pennsylvania who lost their lives,” Senator Hutchinson said. “These men and women served valiantly to protect and defend our freedom and our country. It was through the valor, the bravery and the sacrifice of American soldiers, sailors and Marines that the long and bloody war was won. And for that, we must remember the spirit of America by honoring those who served and never forgetting those who died on December 7, 1941.” 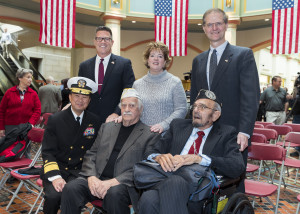