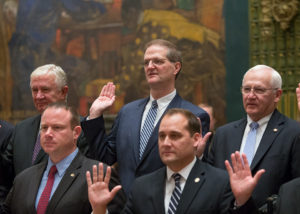 State Senator Scott E. Hutchinson was sworn into office today (January 3) during a ceremony in the Senate Chamber of the State Capitol to begin his second term representing the 21st Senatorial District. Video of the ceremony

“I am humbled and honored to again serve the people of the 21st District,” Senator Hutchinson said. “Now that the festivities are done, it is time for the Legislature to get ready to roll up our sleeves and get to work for the people of Pennsylvania.”

Senator Hutchinson said that he has targeted economic development and job growth as his legislative priorities as Finance Chairman. The state tax code and the mix of revenues which fund state government are the main purviews of the Finance Committee.  As such, comparisons of the types, provisions, and mixes of taxes with other locations are key components of job competitiveness and business investment.

“I am very much interested in financial issues based on my background and I will work to continue to improve the jobs climate in Pennsylvania,” Senator Hutchinson said. “We need to look for ways to make Pennsylvania more competitive in the national and international marketplace. We must find ways to promote business opportunities that lead to job creation.”

Prior to joining the Senate in 2013, Senator Hutchinson represented the 64th Legislative District in the state House of Representatives from 1992 to 2012. Prior to election to the House, he served as the Chief Deputy County Treasurer for Venango County from 1984 to 1992.

Born in Oil City, Venango County, Senator Hutchinson graduated from Oil City Area High School and earned a Bachelor of Science degree in Economics from the Wharton School of Finance at the University of Pennsylvania in 1983. He has taken additional courses at the University of Pittsburgh at Titusville and Thiel College in Greenville. Senator Hutchinson is married to the former Mary Beth Radkowski. They have three children, Sophie, Anne Marie and Lucy.